As New York officials on Thursday hurriedly launched a targeted lockdown to stamp out rising rates of positive coronavirus test results, chaos, confusion and tension erupted over restrictions that are closing schools and businesses and greatly limiting attendance at places of worship.

There were competing hot-spot maps, issued by Mayor Bill de Blasio of New York City and then by Gov. Andrew M. Cuomo, which overlapped and contradicted each other. Schools and businesses that were to be shut down on one map were not on the other. The city, where the rules took effect on Thursday in parts of Brooklyn and Queens, made a searchable online database of addresses available so New Yorkers could determine which zone they were in.

Two lawsuits were also filed on Thursday, one by an Orthodox Jewish group and the other by the Roman Catholic Diocese of Brooklyn, to stop the state from enforcing the governor’s restrictions on houses of worship.

The legal actions came after ultra-Orthodox Jews in the Borough Park neighborhood of Brooklyn this week lit masks on fire and attacked an Orthodox reporter who has documented local resistance to social distancing.

And in other Brooklyn neighborhoods like Bensonhurst and Windsor Terrace, parents rallied against the sudden closure of schools.

The targeted lockdown, in place for two weeks, divides virus hot spots into three color-coded zones of red, orange or yellow, with nonessential businesses in the hardest-hit areas required to shut down. Restaurants and bars in a red zone, which has the most severe rules, can only offer takeout and delivery, just like in the spring. Houses of worship are limited to just 10 individuals, a number that coincides with the minimum requirements of a Jewish prayer service.

After two weeks, Mr. de Blasio said Thursday that the city would work with the state to reassess whether a longer timetable were needed.

“This is a turnaround that, if we do it right, could only take a few weeks,” Mr. de Blasio said Thursday. “If we don’t do it right, it could go a lot longer.”

Today we establish clear limits for areas where we see high positivity: The Cluster Action Initiative.

Locations will be categorized either Red, Orange, or Yellow, based on proximity to the cluster.

The severity of the problem will determine the response. pic.twitter.com/707FYGHB0g

The city shut down 61 public school sites on Thursday, he said; in total, 153 locations had been closed in the red and orange zones.

Earlier in the week, Gov. Andrew M. Cuomo announced that schools in nine ZIP codes in Brooklyn and Queens had to be closed for in-person instruction on Tuesday. But when the state released updated guidance, some of those schools fell into yellow zones, in which schools can remain open. Mr. de Blasio said on Thursday that 16 schools in those areas will remain closed for now.

“We’re going to keep those schools closed too because the city believes fundamentally those schools have to be closed as part of the overall strategy,” the mayor said.

City Hall officials were perplexed by the governor’s new maps, and frustrated by their lack of clarity, but thankful that he had agreed to do something, a de Blasio administration official said. But the map files the state had given the city were flawed, two city officials said, with some geographic borders not corresponding to streets, leaving people to guess whether their schools or stores were required to close. 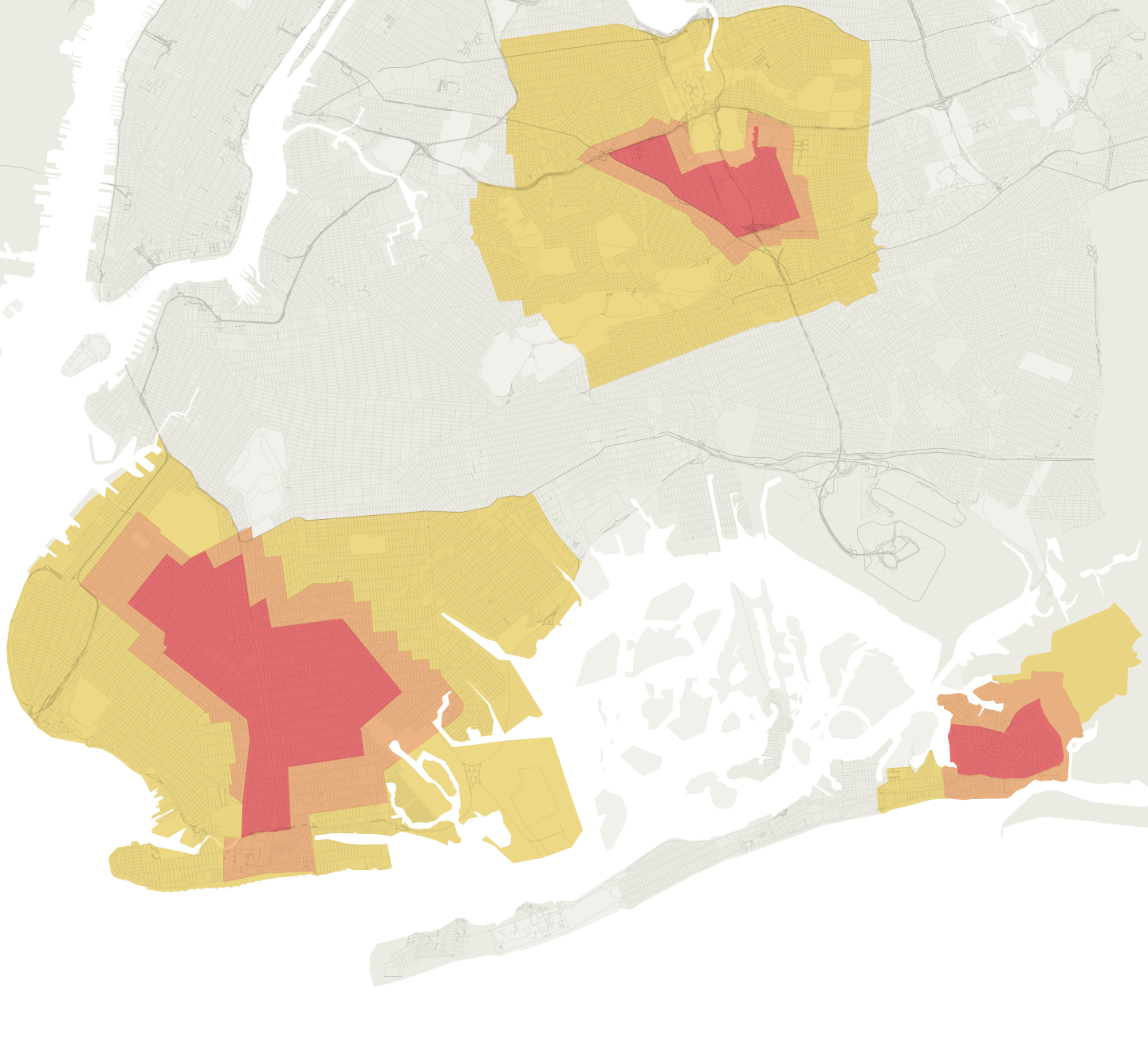 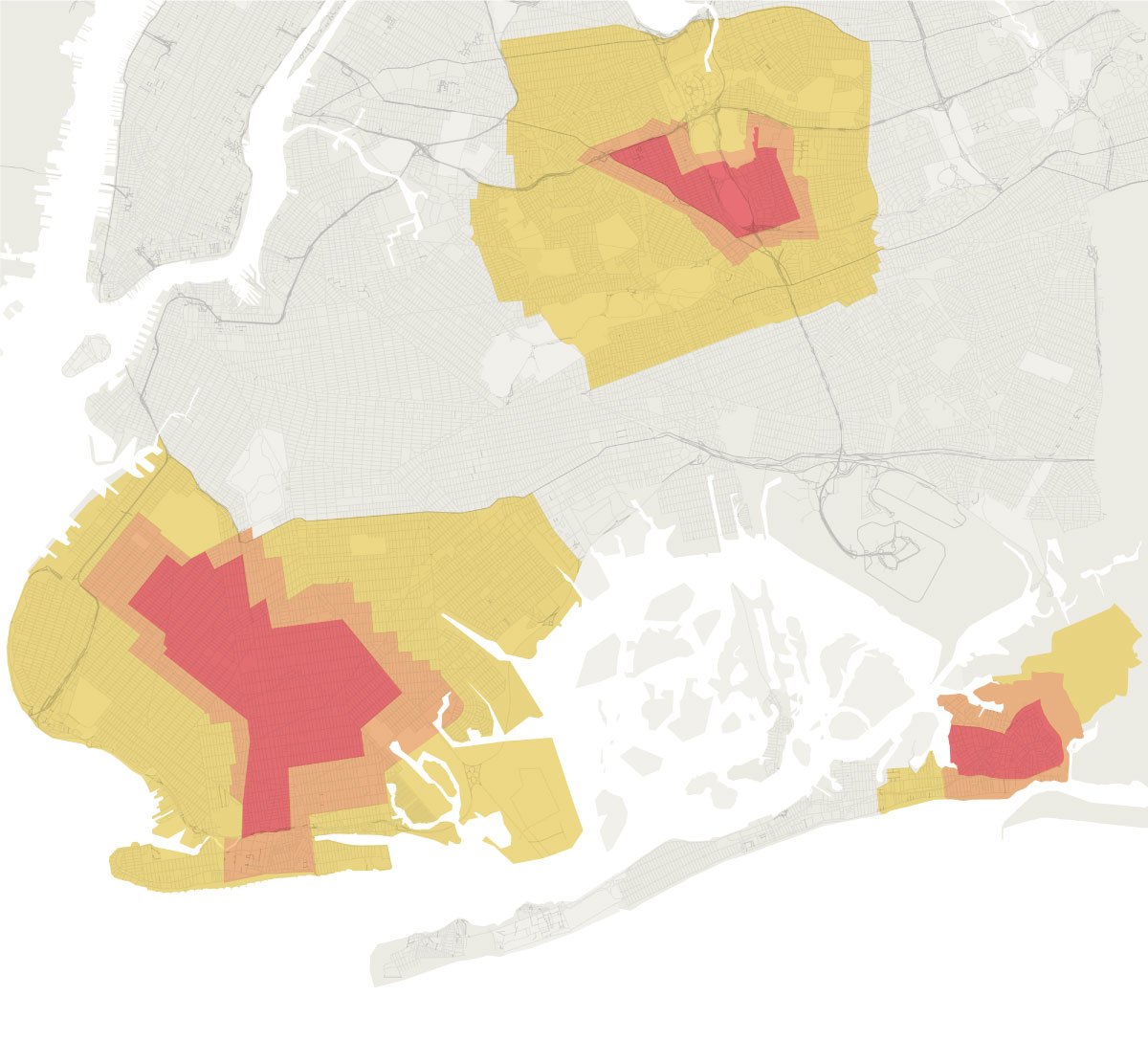 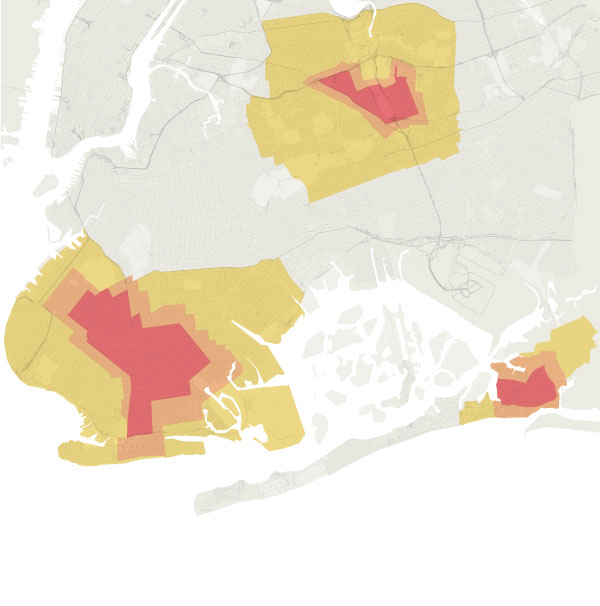 Robert Mujica, the governor’s budget director and a member of his coronavirus task force, said city officials are merely upset that the governor’s office second-guessed them, and that they should have worked with the state earlier in the process.

“Their plan was to put this in place on Wednesday,” Mr. Mujica said. “We, having no info on this until Sunday afternoon, worked around the clock to deal with their timeline and get the maps drawn in a way that actually made sense.”

On Thursday, the rules also became the subject of litigation, as an Orthodox Jewish group and the Roman Catholic Diocese of Brooklyn sought to block the enforcement of capacity restrictions at houses of worship.

“The executive orders this week have left us with no other option than to go to court,” Nicholas DiMarzio, Bishop of Brooklyn, said in a statement, adding that it was “an insult to once again penalize all those who have made the safe return to church work.”

Statewide, the daily positivity rate was 1.26 percent, Mr. Cuomo said, adding that hospitalizations were up from the previous day, to 754.

Long Trends and Disruption: The Anatomy of the 'Post World' of the Covid-19 Crisis - Valdai Discussion Club