For Europe, the numbers keep climbing.

In Spain on Sunday, government officials declared a state of emergency. In France, deaths were rising as hospitals struggled to keep up a rising tide of patients. And Italy, the first Western country to impose a general lockdown early in the pandemic, officials announced new restrictions they hoped would preclude the need for a second.

It was a grim weekend for Europe, which once seemed to have put the virus in check after some countries imposed stringent restrictions.

“The reality is that Europe and Spain are immersed in a second wave of the pandemic,” the Spanish prime minister, Pedro Sánchez said after a meeting of cabinet officials on Sunday.

In addition to declaring a state of emergency, the government ordered a nationwide curfew to begin on Sunday that will limit Spaniards’ movement between 11 p.m. and 6 a.m., except in the Canary Islands, where there are fewer new cases. The new emergency powers also mean regional officials can impose harsher restrictions on movement between areas and limit gatherings to six people.

Spain last week became the first Western European country to surpass 1 million confirmed cases, and Mr. Sánchez said he would ask Parliament to approve the state of emergency until May.

In France, which quickly caught up to the million mark, the numbers seemed to just be climbing. On Sunday, the authorities announced a record 52,010 new case, the fourth day in a row they exceeded 40,000.

After months of falling intensive care numbers, French health workers are back in the trenches. In the Loire, which has been badly hit by the virus, the authorities struck a reassuring tone.

“The situation is indisputably disturbing, and very tense in the hospitals, but we have it under control,” one health official told Agence France-Presse.

The French government last week expanded its nightly curfew to 38 more regions and to Polynesia.

In Poland, which has been combating one of the most severe outbreaks in Europe, President Andrzej Duda of Poland has tested positive for the coronavirus just days after the deputy prime minister entered quarantine after exposure to somebody who was infected.

And in Italy, which still has the highest death toll in continental Europe, Prime Minister Giuseppe Conte also tightened restrictions on Sunday, ordering early closures of bars and restaurants and the total shutdown of gyms, swimming pools, theaters, cinemas and concert halls.

For the next month, bars, pubs, ice cream shops, pastry shops and restaurants will be allowed to stay open on weekends, but will have to shut down at 6 p.m. The government also “strongly recommended” that employers increase remote work, and that citizens avoid leaving their home districts as much as possible.

New restrictions began earlier this month, after Italy registered more than 2,000 cases for the first time since April. It set a record on Saturday with 19,640 new cases.

Italians, Mr. Conte said, must be willing to make “small sacrifices” like eating dinner at home and giving up on theaters or concerts.

“If we don’t think like this, we won’t be able to keep the curve of contagion under control and manage the pandemic,” he said. “These measure are necessary, and I hope sufficient.” 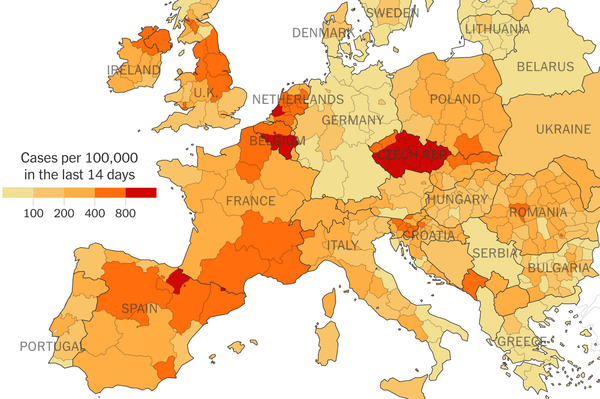 Where Europe’s Second Wave Is Filling Up Hospitals

People across much of Europe — including France, Italy, Poland and Spain — are now more likely to be hospitalized with Covid-19 than those in the United States.

The Overlooked Key to Leading Through Chaos - MIT Sloan

The latest on the 2020 election: Live updates - CNN

How Ranked-Choice Voting Could Determine The Senate's Makeup - NPR

The Mobster-in-Chief: Will the November election be decided in the streets? - Salon