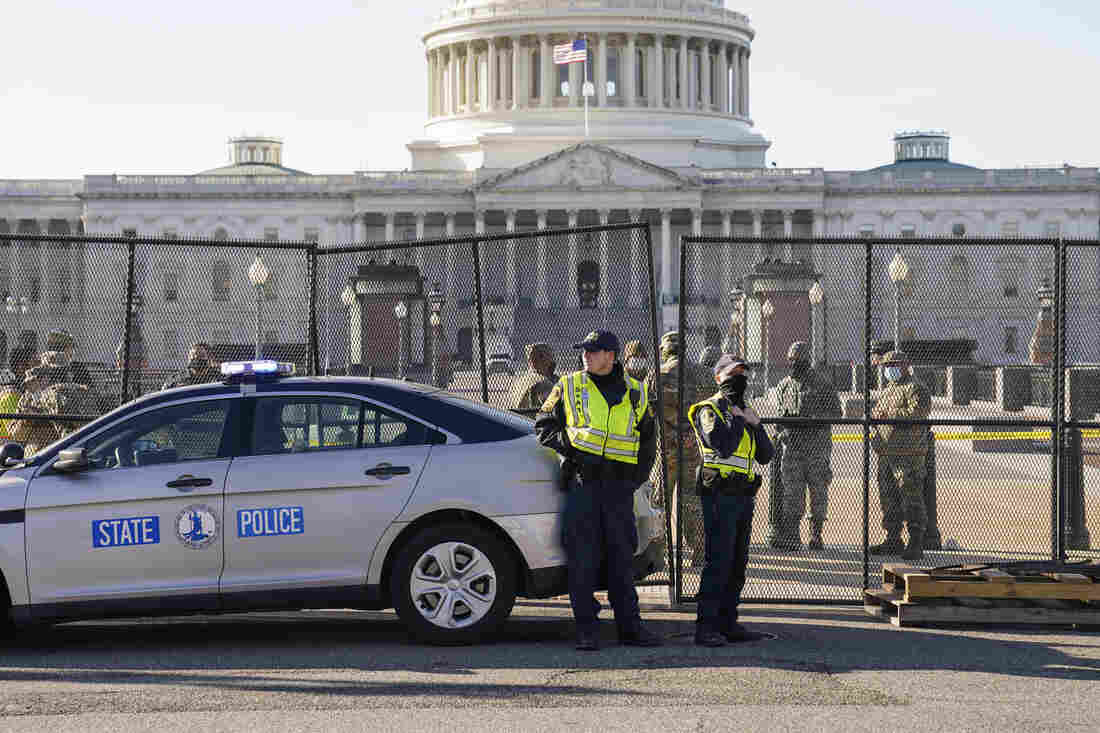 Fencing is placed around the exterior of the Capitol grounds the day after a violent throng of pro-Trump rioters spent hours running rampant through the Capitol. Lawmakers from both parties are criticizing the response by the U.S. Capitol Police. John Minchillo/AP hide caption 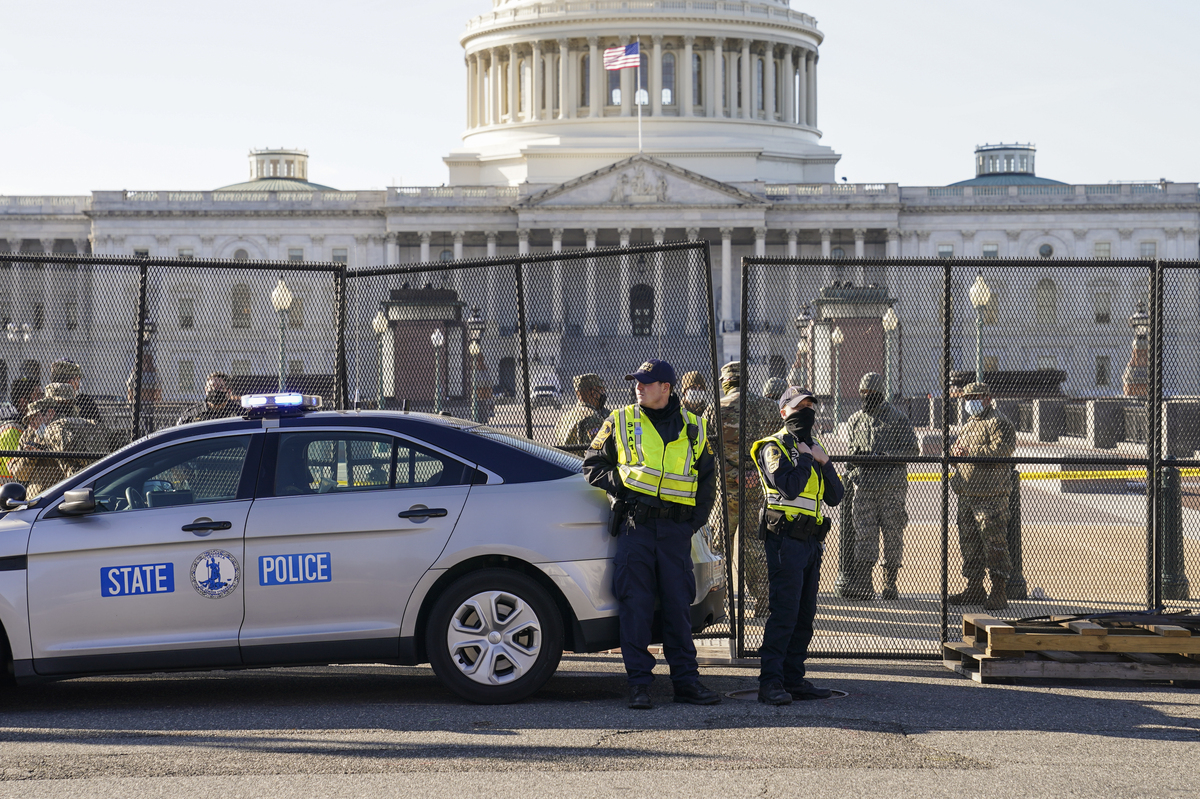 Fencing is placed around the exterior of the Capitol grounds the day after a violent throng of pro-Trump rioters spent hours running rampant through the Capitol. Lawmakers from both parties are criticizing the response by the U.S. Capitol Police.

A day after an insurrection that overtook the U.S. Capitol, two top Capitol security officials have resigned from their posts amid building pressure from lawmakers and others surrounding failures that allowed the dramatic breach.

The U.S. Capitol Police Chief Steven Sund resigned his position hours after House Speaker Nancy Pelosi and others called for his removal in the wake of a series of security failures.

"I am respectfully submitting my letter of resignation, effective Sunday, January 16, 2021," Sund , who earlier defended his department, said in his letter Thursday. "It has been a pleasure and true honor to serve the United States Capitol Police Board and the Congressional community alongside the women and men of the United States Capitol Police."

The move comes several hours after Pelosi told reporters she hadn't even heard from Sund after Wednesday's attack on the Capitol, and made clear she would be calling for his ousting.

"There was a failure of leadership at the top of the Capitol Police," Pelosi said.

Earlier, the U.S. Capitol Police union also issued a statement calling for the removal of leadership for the agency, including Sund. Gus Papathanasiou, head of the union, said a lack of planning, backup, equipment and communication failures led to the greatest breach of the Capitol since 1812.

"Without a change at the top, we may see more events unfold like those we saw on January 6th. We cannot leave our officers and the Capitol Hill community they protect, to the mercy of further attacks amid a vacuum of leadership," said Papathanasiou said. "Until we have a leadership team at USCP that is willing to work hand in hand with the Union and our Officers as one team, we will continue to have systemic failures."

"If Senate Sergeant-at-Arms Stenger hasn't vacated the position by then, I will fire him as soon as Democrats have a majority in the Senate," said Schumer — who is due to take over as majority leader after Democrats won both Senate seats in Georgia's runoff elections this week — in a statement to reporters. He noted that the current majority leader, Sen. Mitch McConnell of Kentucky, appointed Stenger, saying, "He did a terrible, terrible job."

Insurrection At The Capitol: Live Updates

Pelosi, Schumer Join Chorus Of Calls For Invocation Of 25th Amendment Against Trump

While many lawmakers prefaced their concerns by applauding the bravery of the U.S. Capitol Police and others, they also said the hourslong attack should never happen again.

Republican Sen. Lindsey Graham of South Carolina agreed with Schumer that Stenger should resign. Graham said that there was better protection in place during Black Lives Matter marches and that Wednesday could have been much worse.

"Anyone in charge of defending the Capitol failed their duties. If they would have been in the military, they would have been relieved of their commands and most likely court-martialed," said Graham. "So the first thing that has to happen is to hold those accountable for failing to defend the nation's Capit0l while the Congress was in session."

Graham also called for a joint task force to be assembled to identify every individual who breached the Capitol, occupied chambers, destroyed property and entered offices.

In a statement earlier Thursday finally recounting arrests and some other details from the attack, Sund defended the agency. He also pointed to challenges in defending an "open environment," especially when it comes to First Amendment activities.

He also called the actions of his officers "heroic."

McConnell, the top Senate Republican, on Thursday stopped short of calling for firings or removal of officials. Instead, he said while the ultimate blame lies with the "unhinged criminals" who broke into the Capitol, this doesn't preclude Congress from addressing its "shocking failures" in security.

"Yesterday represented a massive failure of institutions, protocols, and planning that are supposed to protect the first branch of our federal government," said McConnell, who will soon become the chamber's minority leader, in a statement. "A painstaking investigation and thorough review must now take place and significant changes must follow."

McConnell's concerns echoed those heard throughout the ranks of congressional leaders and rank-and-file members in the aftermath of the insurrection, which paralyzed the nation's Capitol. More than 50 law enforcement officers were injured and four civilians died, including one woman shot by a Capitol Police officer.

The security breakdown came in the form of pro-Trump extremists who stormed the Capitol complex and stopped the counting of electoral votes to confirm President-elect Joe Biden's win. It's now expected to become a centerpiece of debate in the coming weeks, especially ahead of Biden's inauguration on Jan. 20.

"You can be assured that somebody is going to be held responsible for this," Rep. Tim Ryan, D-Ohio, who heads up the appropriations subpanel that oversees Capitol Police funding, told reporters in a call Thursday. "We're going to review what the plans were and what exactly happened, and then I will assure every American that the appropriate people will be held accountable. Because this was an embarrassment and it was unacceptable."

Ryan joined House Appropriations Committee Chairwoman Rosa DeLauro, D-Conn., in a statement denouncing the failed "coup attempt" instigated, they say, by President Trump. However, Ryan and DeLauro said the Capitol's security breach raises serious questions about what law enforcement did and what should have been done differently.

Both said their committees would "robustly" investigate Wednesday's events, including holding hearings to directly question leaders about what went wrong. The U.S. Capitol Police, which employs more than 2,000 workers, including police officers and civilians, received $516 million in funding for the current fiscal year.

Ryan told reporters that the entire available Capitol Police force, at an estimated 1,400 to 1,500 officers, plus roughly 1,000 officers from Washington, D.C.'s Metropolitan Police Department, were on the scene at the Capitol at the time of the incursion. He said the extremist mob was violent, swinging lead pipes and other weapons at officers, leaving 15 officers in the hospital, including one in critical condition.

"I'm livid about the whole thing because I had conversations with the sergeant-at-arms and the chief of the Capitol Police and assurance that every precaution was being taken," Ryan said. "We were told nobody was going to be anywhere close to the Capitol."

Insurrection At The Capitol: Live Updates

Ryan said he was told the initial assessment was that violence was not anticipated by law enforcement, despite explicit calls for violence in the days leading up to the event. He said rank-and-file offers did the best they could in circumstances where they were overrun, without backup and support. Ryan noted that Capitol Police held protesters off for more than hour before the incursion.

"This has kind of broken the veil of protection in the Capitol," Ryan said. "This was basically domestic terrorism at one of the great shrines of our democracy."

Wray released a statement earlier on Thursday saying the FBI had "deployed our full investigative resources" and was coordinating with other law enforcement agencies. "Our agents and analysts have been hard at work through the night gathering evidence, sharing intelligence, and working with federal prosecutors to bring charges." The FBI set up a tip line for information or images of those involved.

The House Democratic lawmakers noted that the upcoming swearing-in of Biden made the probe urgent.

"Given the incendiary environment caused and exacerbated by President Trump's rhetoric, along with the upcoming inauguration of President-Elect Joe Biden, it is imperative that the FBI leverage all available assets and resources to ensure that the perpetrators of this domestic terrorist attack and those who incited and conspired with them are brought to justice, and that this domestic terrorist group is disrupted from further actions against our government," wrote House Oversight Committee Chair Carolyn Maloney, Judiciary Committee Chair Jerry Nadler, Homeland Security Chair Bennie Thompson, Intelligence Chair Adam Schiff, Armed Services Chair Adam Smith and Rep. Stephen Lynch.