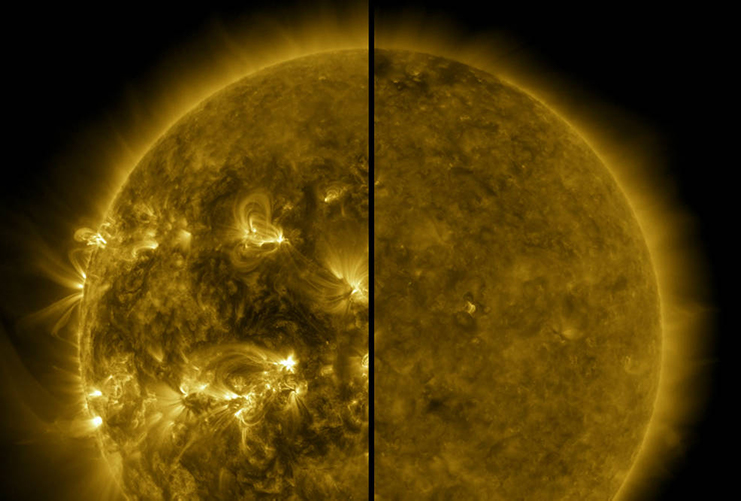 The bill has been in the works for about five years, following in the footsteps of the Obama administration’s 2015 space weather strategy and action plan, which the Trump administration updated in 2019. An earlier attempt to pass space weather legislation failed in 2018, with the House and Senate advancing competing bills, but a compromise version was developed this year.

The initiative reflects concerns from lawmakers that space weather events can cause serious disruptions to terrestrial and space-based activities, requiring a long-term cross-government commitment to the problem.

NOAA has the primary responsibility for producing operational forecasts of space weather, though it currently relies on coronal mass ejection imagery collected by NASA and the European Space Agency’s Solar and Heliospheric Observatory (SOHO), which launched in 1995 and is well past its design lifespan. The bill requires NASA to continue operating SOHO “for as long as the satellite continues to deliver quality observations” and instructs NOAA to secure access to backup capabilities in the event SOHO fails unexpectedly.

For solar wind measurements, NOAA currently relies on its Deep Space Climate Observatory (DSCOVR), launched in 2015, with NASA’s 23-year-old Advanced Composition Explorer as a backup. The bill directs NOAA to operate DSCOVR and other relevant space-based assets for “as long as is practicable” and secure reliable backup capabilities. NOAA is currently planning to augment DSCOVR and SOHO’s capabilities through its Space Weather Follow On system, which is composed of a dedicated satellite and an instrument aboard the GOES-U weather satellite, both planned for launch in 2024.

The bill expresses support for NOAA to build on its baseline observation capabilities in collaboration with the Department of Defense, which conducts its own forecasts for military missions, directing them to consider obtaining additional observations through commercial or academic partnerships, prize competitions, microsatellites, or instruments installed as a secondary payload on other spacecraft. It also authorizes NOAA to create a pilot program for purchasing space weather data from commercial sources, modeled on an analogous program for terrestrial weather data that the agency has already implemented at the direction of Congress.

For ground-based observations of the Sun, the bill requires the National Science Foundation to “maintain and improve” such measurements as necessary and to make publicly available key data streams to support space weather model development.

More generally, it directs NSF, NASA, and DOD to continue supporting basic research in disciplines relevant to space weather, including science priorities identified in the decadal surveys for solar and space physics produced by the National Academies. It also instructs agencies to collaborate on improving the translation of space weather research into operational forecasts and considering operational needs when designing research projects.

The legislation codifies the White House Office of Science and Technology Policy and an existing interagency working group as the entities responsible for coordinating federal space weather efforts and tasks them with developing a strategy that addresses long-term observational requirements and opportunities, among other matters. NOAA, NASA, and NSF are also directed to sponsor a National Academies “government-academic-commercial roundtable” to facilitate interaction between the working group agencies and non-federal stakeholders.

In addition, the bill establishes a 15 member Space Weather Advisory Group under the Federal Advisory Committee Act, with membership split evenly between representatives from the academic, commercial, and end-user communities. The committee’s first task will be to conduct a user survey to identify needs for research, observation, and other capabilities that underpin space weather-related services.

The primary sponsors of the bill are Reps. Ed Perlmutter (D-CO) and Mo Brooks (R-AL) and Sens. Gary Peters (D-MI) and Cory Gardner (R-CO). The bill made it through the legislative process with relative ease this Congress, with the Senate passing an amended version by unanimous consent in July that adopted some House-backed language, such as the commercial weather pilot program.

Speaking on the House floor last week, Perlmutter said that testimony at a 2015 hearing on the potentially devastating hazards of space weather grabbed his attention. He recounted how University of Colorado Boulder physics professor Daniel Baker said “we’d probably still be picking up the pieces” had a massive space weather event in 2012 occurred a week earlier. Baker estimated the event was two or three times stronger than the 1859 Carrington Event, which induced damaging currents in telegraph wires around the world.

Besides the potential risks to infrastructure on Earth, Perlmutter also said the efforts supported by the bill will help NASA cope with the threats that radiation poses to astronauts aboard the International Space Station and in future missions to the Moon and Mars. Perlmutter has been a vocal advocate for crewed Mars exploration.

House Science Committee Ranking Member Frank Lucas (R-OK) likewise noted the technological and human dangers posed by space weather events in his remarks on the bill. He cited both Oklahoman farmers’ reliance on GPS for precision agriculture and the radiation exposure risks astronauts face beyond low-Earth orbit as examples of areas that would benefit from improved space weather research and coordination.

Lucas also applauded the commercial space weather data provision, which he originally proposed as an amendment to the House bill in January, saying it “will ensure that emerging private-sector companies will have a seat at the table.”

In a press release on the House action, Sen. Peters stated, “With the coronavirus pandemic forcing schools, small businesses, and families to find innovative ways to stay connected, it has never been more important for our nation to protect against threats to our electric grid, telecommunications networks, and even air travel.” He continued, “While we cannot predict when they will happen, space weather events pose a unique and significant challenge to our national security, economy, and technological infrastructure. We simply cannot afford to be caught flat-footed, and I look forward to this bipartisan bill being signed into law.”

Several scientific organizations have endorsed the bill, including the American Astronomical Society (an AIP Member Society), American Geophysical Union, and the University Corporation for Atmospheric Research.

In an op-ed published in The Hill this month, UCAR President Tony Busalacchi wrote, “Our solar forecasting capabilities at present are comparable to terrestrial weather prediction before the Second World War when communities had little warning of incoming storms. … We have now arrived at a pivotal moment in forecasting solar storms. At a time when society is more dependent than ever on advanced e-based technologies, the PROSWIFT Act lays out a clear road map for bringing together expertise in government, the private sector, and academia to forecast these damaging events.”