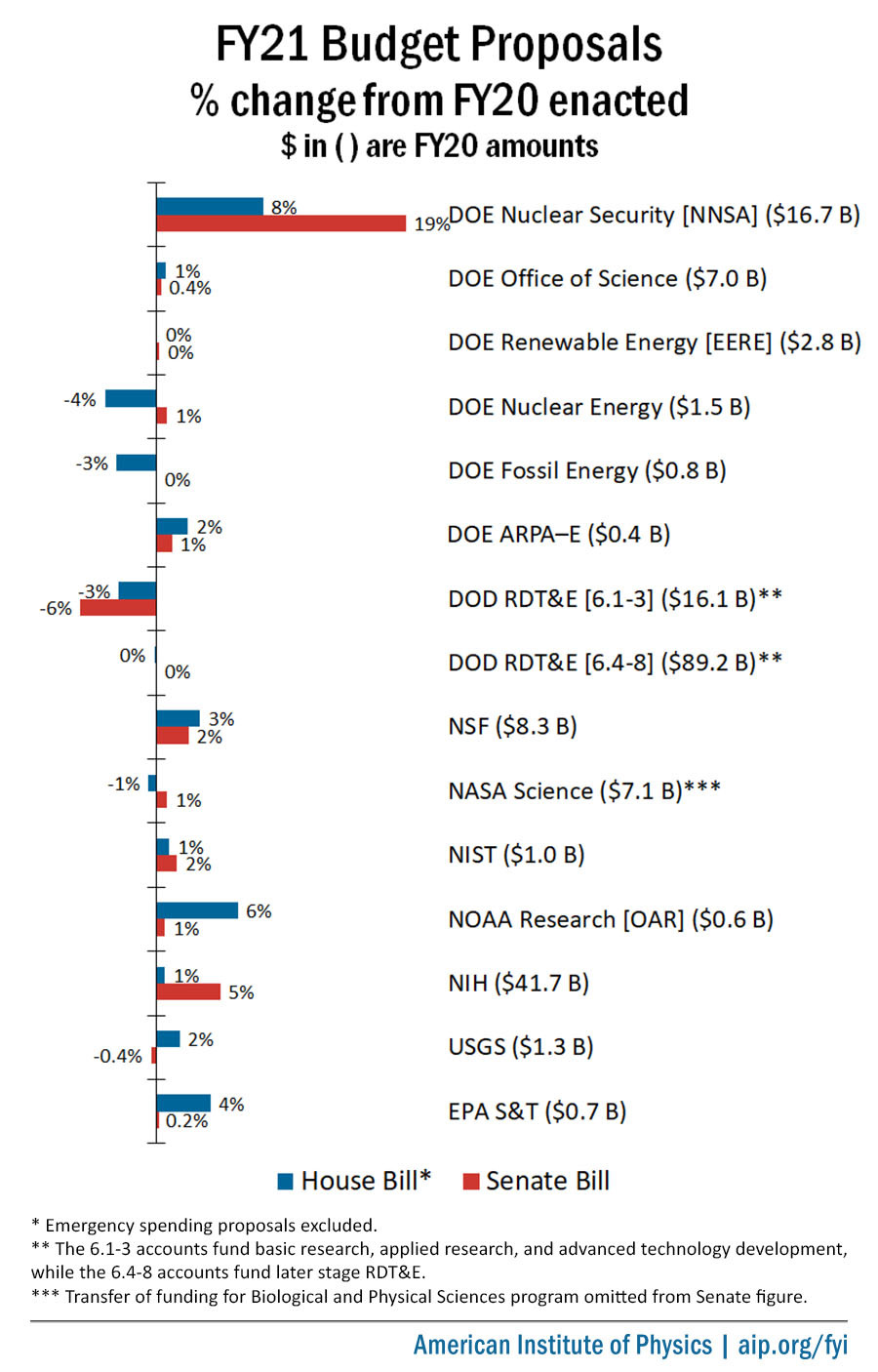 The Senate Appropriations Committee released its spending bills for fiscal year 2021 last week as it prepares to negotiate a final agreement with the House before current funding expires in early December. Like the House, the Senate is proposing mostly steady funding for science agencies, with a few notable exceptions, such as allocating billions of dollars in additional spending for the National Nuclear Security Administration and National Institutes of Health. However, its bills include no equivalent of the House’s proposals for billions of dollars in one-time “emergency” spending at NIH and the Department of Energy. Republicans have so far opposed incorporating emergency funding into the regular appropriations process. Senate Majority Leader Mitch McConnell (R-KY) has said he aims to pass appropriations and a separate, "highly targeted" relief bill by year’s end.

According to the Washington Post, two recent appointees to the National Oceanic and Atmospheric Administration, David Legates and Ryan Maue, have both been detailed to the U.S. Global Change Research Program to oversee planning for the next National Climate Assessment. Legates, who dismisses anthropogenic climate change as a cause for concern, is now leading the program after its previous executive director, climate scientist Michael Kuperberg, was reassigned to the Department of Energy, where he holds a permanent position. Kuperberg had been on detail to USGCRP since 2015. Maue, who disputes the severity of climatic warming trends, is NOAA’s chief scientist and his exact role at USGCRP has not been reported. Together, Legates and Maue will have an opportunity to shape the scope of the assessment as well as the roster of scientists who contribute to it. However, the incoming Biden administration will also be able to review and reverse their actions. To lead the assessment, the Trump administration recently appointed atmospheric scientist Betsy Weatherhead, who is regarded as a mainstream choice.

President-elect Biden named members of his “agency review teams” last week who are tasked with laying groundwork for his administration to begin on Jan. 20, including at science agencies and offices.

Biden has also reportedly formed a special transition team focused on COVID-19 that is distinct from the 13 member COVID-19 advisory board he announced on Nov. 9. Currently, the ability of Biden’s transition effort to interact with current officials has been hampered by the refusal of the General Services Administration to officially designate Biden as the “apparent winner” of the election, in accord with President Trump’s refusal to concede. For example, Health and Human Services Secretary Alex Azar has said the current coronavirus task force will not communicate with Biden’s team until GSA makes its determination.

A group of climate experts, Obama administration alumni, and members of President-elect Biden’s transition team who comprise the “Climate 21 Project” released a policy blueprint last week aimed at enabling a “rapid-start, whole-of-government climate response” once Biden takes office in January. Assembled over the past year and a half, the report recommends the White House establish a National Climate Council, “co-equal” to the Domestic Policy Council and the National Economic Council, to steer the administration’s climate change efforts across agencies. It further recommends building up a climate team within each relevant federal agency and forming a Cabinet-level task force to develop a four year “Climate Ambition Agenda” within 90 days. The report also recommends budget priorities and identifies “key program opportunities” for 11 individual federal agencies and offices.

An independent review board affirmed last week that NASA is “ready” to undertake a mission to return samples from Mars in cooperation with the European Space Agency, while questioning NASA’s current cost and schedule estimates. Still in its early planning stages, the mission’s proposed architecture comprises a lander and rover that will retrieve samples obtained by the Perseverance rover and then launch them off the surface for transfer to an orbiter, which will transport them back to Earth. Emphasizing the mission’s complexity and risks, the board recommends that NASA plan for a launch in 2028 rather than the agency’s notional target of 2026. The board also estimates the mission will probably cost NASA between $3.8 billion and $4.4 billion, whereas the agency has been planning around a figure of about $3 billion. Noting NASA is already expecting to need $500 million more for the mission than initially supposed in fiscal years 2022 and 2023, the board agrees the funding is needed to prevent increases in overall costs later on. It also indicates there are no ways to significantly reduce the mission’s scope should it be deemed necessary to cut costs.