Empty
Editor's Notes: With Joe Biden being declared the winner of the US presidential election, many have discussed what changes his administration might bring to China-US relations. Policymakers and analysts around the world are speculating what policies and tools Biden will use to deal with China. Global Times (GT) reporter Hu Yuwei talked with Stephen Roach (Roach), a senior fellow at Yale University's Jackson Institute for Global Affairs and an expert on China-US economic ties, for his insights on the future direction of both economies and China-US trade talks. 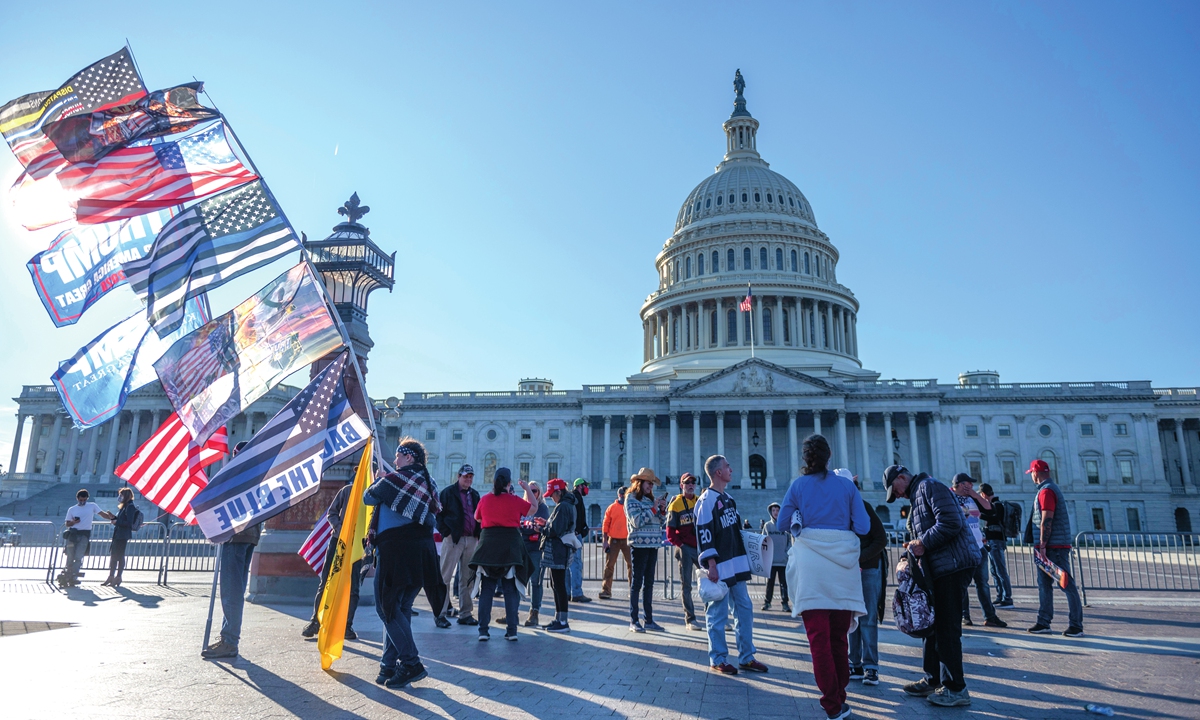 Supporters of Donald Trump rally at the US Capitol in Washington, DC, on Saturday. Photo: AFP

GT: Will Biden's win be a turning point for strained US-China relations? To what extent will Biden turn away from the Trump administration's sledgehammer approach to China?

Roach: I do not think it is a turning point. However, I do think it is an opportunity to use a different approach in engaging with China. Under the Biden administration, the dialogue with China will be more transparent, more predictable, and more disciplined. Biden will not use Twitter and a shotgun approach to tariffs to threaten or address the concerns the US has with China.

But the structural issues that have been raised in the Trump administration - intellectual property rights, technology transfer, cybersecurity, and China's compliance with the terms of WTO - will remain on the table and continue to be the focus of ongoing efforts by the US to reach a constructive agreement with China.

I am hopeful that this disciplined approach will be far more productive in achieving an improved relationship between our two nations.

GT: Will Biden heal trade relations and de-escalate the trade war? If not, will Biden propose new tariffs given that he said he has no plans to remove existing tariffs?

Roach: The tariff war was a big mistake. While it did lead to the so-called Phase I trade deal, that approach is seriously flawed. We had merchandise trade deficits with 102 countries last year; Phase I was a bilateral attempt to fix America's multilateral problem. Simple economics tells you that this approach will not work. Biden and his advisors are aware of that. I think that they will move away from the Phase I framework negotiated by the US and China and try to find a more workable approach to deal with the trade imbalances between two nations.

There will eventually be a reduction in tariffs. We've learned from history, and we've learned from tracking the impact of the current round of tariffs, that this is not a workable approach for the resolution of trade disputes. If left unchecked, the tariffs could lead to damage to both nations on both sides of the conflict.

My favorite alternative approach would be a bilateral investment treaty. It is one of the best frameworks for mutual opening of markets between the two countries. It could open up China's market to US companies, as well as open up US market to Chinese companies. And it would be based on enforceable and transparent rules governing mutual market access. We were close to reaching an agreement on a bilateral investment treaty during the Obama administration but unfortunately those negotiations came to a halt as soon as President Trump took office in 2017. 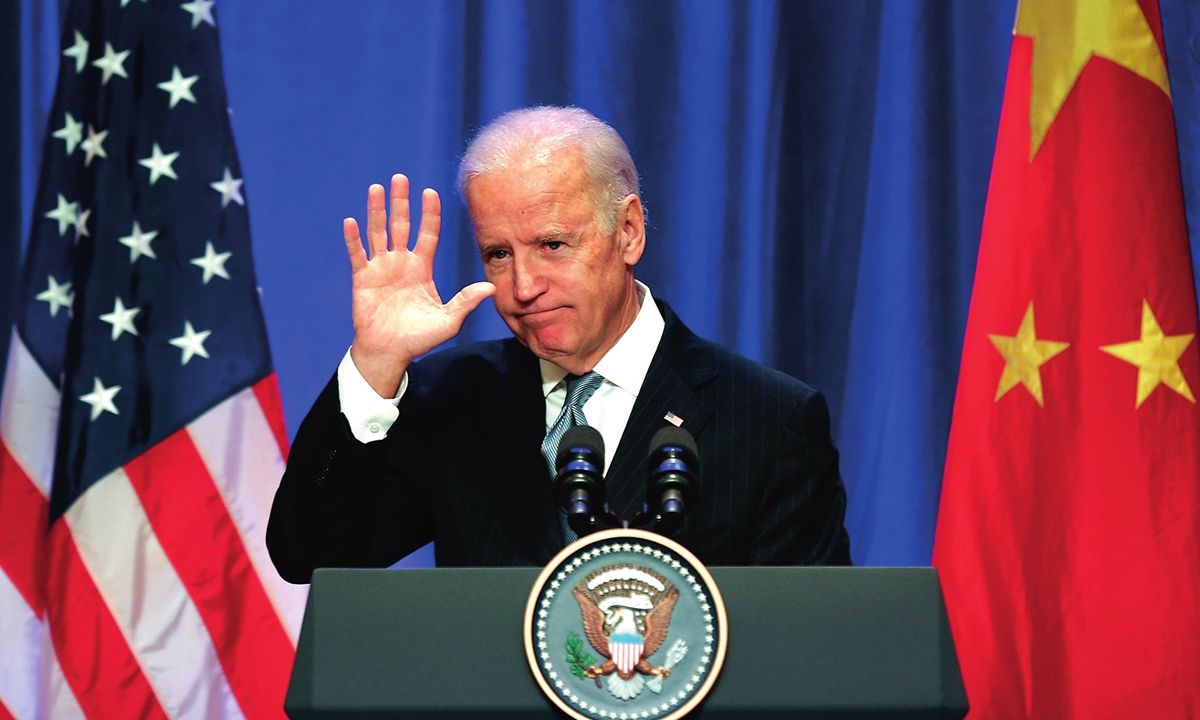 Both the US and China want to expand their exports and growth opportunities. China is very focused now on what it is calling a higher level "Going Out" policy to do this. It will be far easier for China to achieve this objective, as well as for the US to achieve comparable outcomes of market access into China, within the structure of a bilateral investment treaty than under the pressure of the current trade war.

When US-China trade talks resume under a Biden administration, I can assure you that the American side will not be led by Robert Lighthizer. Biden will be able to draw from plenty of well qualified Democrats who have been actively involved in trade related issues in the past.

GT: Will the technology war be continued or escalated? What will be his attitude to Huawei and other Chinese tech companies?

Roach: The allegations that have been leveled against Huawei have been based under the assumption that Huawei will use its 5G platform as a back door method of surveillance on US citizens and companies. Those are assumptions that have never been verified by independent evidence as required by a US court of law. If we choose to pursue the pressure that we are putting on Huawei and its supply chain, in a Biden administration that decision will hopefully be based more on hard evidence rather than assumption.

We need to be very transparent in presenting that evidence to make certain that these allegations are correct. I think the Trump administration has abused the so-called entity list to block Huawei and a wide range of its foreign supply chain from participating in the US technology businesses. But the entity list was never designed to be used as an instrument of a political pressure. The Trump administration has repeatedly abused the tool.

Transparency is absolutely critical in resolving this dispute. We've made a number of allegations against China — from forced technology transfer to the theft of intellectual property to unfair use of industrial policy. Unfortunately, these allegations are not based on strong evidence. We are a nation with a strong foundation based on the rule of law. And our rule of law requires that accusations be supported by hard evidence. I would hope, under Biden administration, allegations of unfair trading practices by China or any other nation would be carefully reviewed to ascertain the validity of any evidence.

GT: What measures do you think Biden might take to contain China's economy after taking office?

Roach: I think "contain" is the wrong word. Containment, by definition, refers to an adversarial relationship. It creates conflict between the two nations and plays its own role in creating the fears between them. Yes, the US public is increasingly concerned about China's actions in the South China Sea, the East China Sea, and the Belt and Road Initiative. These are all concerns that China needs to be more mindful of as it continues to implement its outward facing policies. But I would hope we could work out these issues between us rather than turning the confrontation into one country trying to contain the other's vital economic growth. 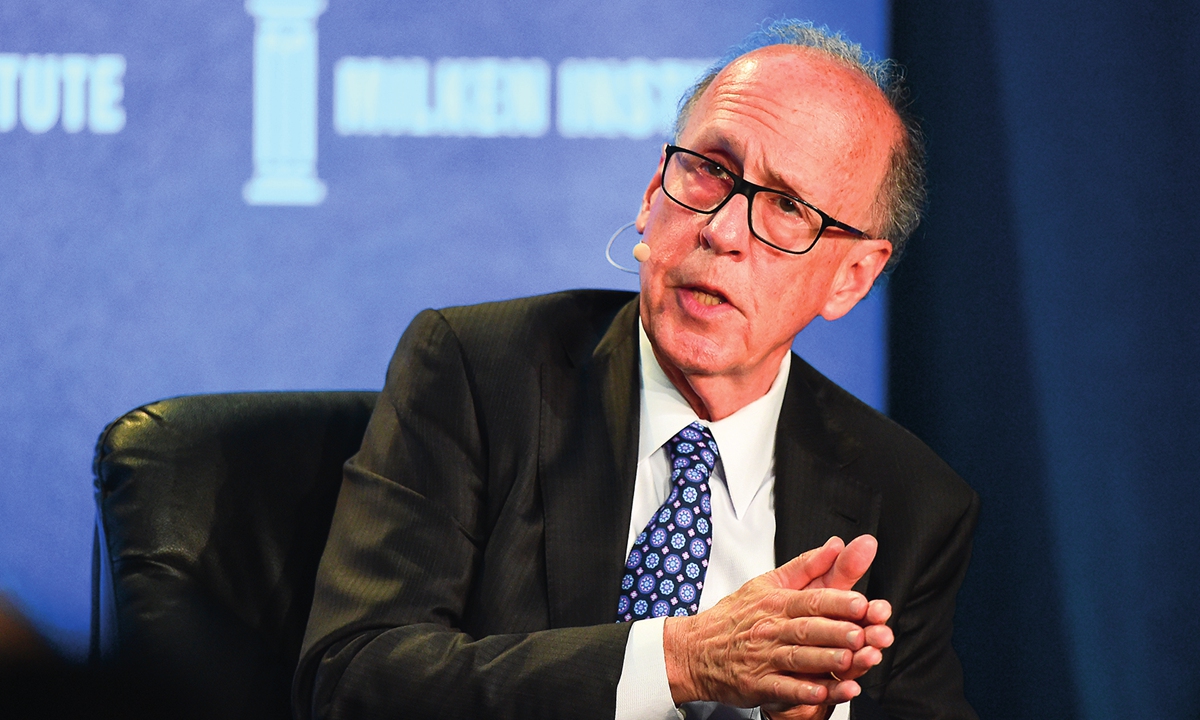 GT: Is it the US or China that will lead the world in economic recovery in the aftermath of the global financial crisis and post-pandemic era?

Roach: The world economy needs recovery from both the US and China. In a pandemic-torn era, China has had a very different approach than the US. China's focus has been very much on taking extraordinary measures to contain the virus, first, and the economy second. However, we in the US have done it the other way around. We have not done a good job in containing the virus, and we've used aggressive monetary and fiscal policy to try to compensate for our shortcomings in public health measures. My fear is that will not work because we're now having a huge surge of infections in the US.

This new phase of the COVID-19 outbreak could once again do serious damage to our economy, as it did last spring. What I'm most hopeful about with respect to Joe Biden is that he will be very serious, much more serious than President Trump, in addressing the virus. I'm not saying that we are going to do exactly what China did. But, hopefully, we will be more determined to contain the virus through social distancing, mask wearing and possibly through curtailment of outdoor activities when the infection is rising. That will be important in healing our economy. And then the US and Chinese economy will together provide strong impetus for the global economy.

Currently, China is playing a much stronger role in driving global economic growth than is the US. If America is successful in controlling the virus, it will be better positioned to resume its role as an engine of global growth.

GT: You have said the US dollar will "crash faster and harder" and "the dollar remains the most overvalued major currency in the world." Why do you think the dollar will weaken? Will Biden save it?

Roach: I think that the main forces at work will be a sharp deterioration of our domestic savings brought about by very large government budget deficits that are going to be just as large under the Biden administration, if not larger, than they were likely to be under President Trump.

And for countries that have major shortfalls of domestic savings, the only way they can grow — even with the reserve currency like the US — is to borrow surplus savings from abroad and run massive current account deficits to attract the foreign capital. Our current account deficit right now is deteriorating at a record rate, it's a minus 3.5 percent of GDP in the first quarter of this year, and is probably headed into the minus 6 to 8 percent zone by the end of this year, which would be a record for us.

And when the current account deficit deepens like that, a couple of things usually happen for us to be able to continue to attract foreign capital — interest rates go up or the currency goes down. Our Federal Reserve has indicated that it is not going to raise interest rates. So there will be even more pressure on the dollar as a result.

The US dollar is going to go down very sharply over the course of this year and into the next year. This would not be the first time. We've had three other occasions in the past where the dollar has fallen by an average of 31 percent — in the 1970s, the mid-1980s, and in the first decade of the 2000s. So my forecast is slightly worse than that, but roughly consistent with those three earlier sharp depreciations of the US dollar. 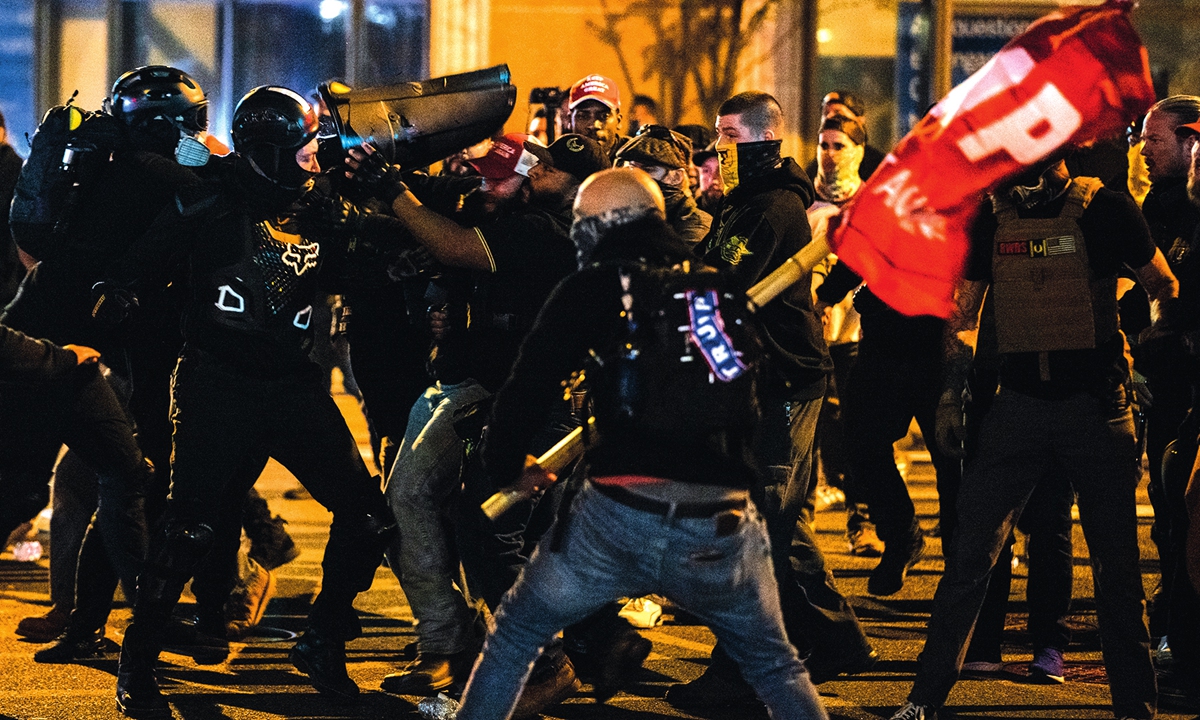 Members of Antifa and the Proud Boys clash in the middle of the street following the "Million MAGA March" on Saturday in Washington, DC over the election results. Photo: AFP

GT: Is it possible for Trump to further hurt China-US relations in the power transition period following the election?

Roach: He is still very active in his role as president. But the clock is ticking on his time in office. His ability to exercise power is limited. For that reason I would urge the Chinese to be patient and not to react strongly to anything President Trump may do to further destabilize the relationship between our two countries. Joe Biden will have the opportunity to reverse virtually anything President Trump can do in his remaining days in office.

GT: Will the US rejoin the Comprehensive and Progressive Agreement for Trans-Pacific Partnership (CPTPP), and why?Roach: I think there's probably a good chance that we will go back to the TPP framework that was very carefully negotiated during the Obama-Biden administration.

While it did not include China, it was a wide ranging, multilateral framework that included many of the largest, most powerful nations in the world. It was also a framework that would have also served the very useful purpose of engaging China on many of the issues that have been raised in the trade dispute with the US. It was a constructive, rules based, high-standard multilateral framework. Utimately, it will work best if it eventually does include China. That should be viewed as an important long-term goal of trade liberalization and economic integration.

How Redfin Is Navigating the Coronavirus Pandemic - Motley Fool

Procrastinator's guide to the 2020 general election in Philadelphia - Billy Penn